Society in solidarity with Crown workers

The Society is supporting 120 workers at Crown Inc. who are on strike in support of good local jobs. Members of United Steel Workers Local 9176, these workers have been on strike for more than 20 months to prevent the company from introducing two-tiered wages and benefits that would mean young workers having it worse than the last generation. 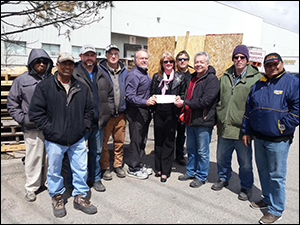 As a show of solidarity, The Society contributed $10,000 to the Crown strike fund that goes to help the workers that have suffered great hardship while standing up for their jobs, which have been in Toronto and unionized for more than 25 years. Two-tiered jobs is a fight The Society has taken on time and again in its own workplaces, and it’s the issue that instigated the 2005 Society strike of Hydro One, the only strike in The Society’s history.

Along with other unions, The Society joined the Crown workers outside the Ministry of Labour on May 1, International Workers’ Day, to demand the Ontario government step in and force Crown Inc. to act in good faith towards its workers.

Among the unreasonable demands of Crown Inc. is that all labour leaders at USW Local 9176 be fired from their jobs.

The Crown workers’ struggle is indicative of the ever widening income inequality gap. While the workers fight for good, middle-class jobs, Crown nearly doubled its profits in recent years and its CEO enjoys a $13 million per year salary.