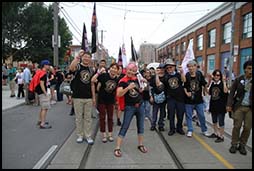 Society members streamed into Labour Day parades across Ontario on September 3 to celebrate the labour movement’s successes and commit to fighting the Stephen Harper and Tim Hudak right-to-work agenda that jeopardizes The Society’s members’ – and all workers’ – pensions and wages.

The Society was represented at parades in Durham, Hamilton, Sudbury, Port Elgin and Toronto. Members and their families marched alongside their union brothers and sisters from across the labour movement, lighting up a day of overcast weather.

The Society had one of its largest turnouts ever in Toronto, where families marched with their children in capes adorned with The Society’s superhero-like logo. The classic rock tunes of S.G. Sinnicks had everyone smiling, dancing and marching to a beat.