The threat of Toronto Hydro privatization has brought together labour and community organizations in a new coalition to fight the sell-off.

The Society is working with organizations that include Toronto and York District Labour Council, CUPE, Social Planning Toronto, Toronto Environmental Alliance, and ACORN. At its most recent Board meeting, The Society dedicated resources to run a strong campaign to amplify the broad opposition that already exists to privatizing Toronto’s local distribution company.

The Society has already launched a web site for people to contact Toronto City Hall to express their opposition to the privatization scheme. Click here now to send your email to Mayor John Tory. Through ads on Facebook, Twitter and Instagram, The Society has also reached tens of thousands of Torontonians. 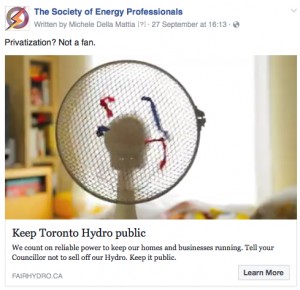 The next decision point expected on Toronto Hydro privatization is at Toronto City Council’s December 13 meeting. This will not be a final vote on privatization but City Council will be asked to take steps toward that outcome.

Congratulations to the following Society members who retired...

The Society is proud to once again support...