New LVPs at Hydro One and Toronto Hydro 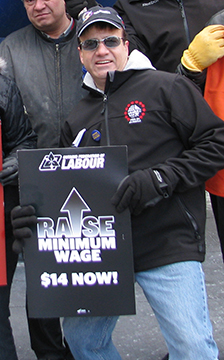 Jim Botari, who served as a Unit Director for the past eight years, will succeed recently retired Hydro One LVP Keith

Rattai. Botari, a Senior Protection & Control Supervisor, was declared the winner following the close of voting on November 27.

First hired by Ontario Hydro in 1990, Botari has been an active Society member since 1994, when he became a Delegate in the Hamilton/Niagara District. From local roles like serving as a Strike Coordinator in 2005 to being a Delegate to the international IFPTE convention, Botari brings two decades of experience to the LVP role.

For Botari and Hydro One members, 2015 will be a big year. Among the issues facing the local are a new round of collective bargaining, and standing up to provincial efforts to split up Hydro One and reform pensions. In facing these issues head on, Botari said he’ll look to continue the legacy of strong, principled leadership that Rattai provided to the local in his 12 years as LVP.

Toronto Hydro also has a new LVP. Henry Quach was acclaimed to the position on October 14. Quach will lead Toronto Hydro through its upcoming round of collective bargaining with the assistance of the newly assigned staff representative to Toronto Hydro, Andy Todd.

Congratulations to the following Society members who retired...

The Society is proud to once again support...